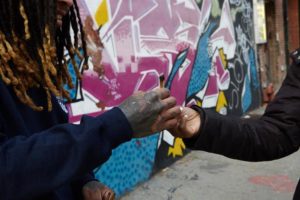 There are approximately 750,000 law enforcement officers in the United States, days after Dallas Police Chief Renee Hall fired Amber Guyger, I logged on to Facebook and noticed a post from a childhood friend who proudly announced his enrollment into a local police force in Connecticut.

For those who don’t know, Amber Guyger, a white female police officer murdered her neighbor, Botham Jean, a black male who was in his own apartment unarmed. Although Botham Jean lived on the third floor and Amber lived directly above on the fourth, she was off duty and claims Botham was an intruder in her apartment. Her claims are concerning, and this story has gained national attention because of race (a white cop killing another black male) coupled with the excessive use of deadly force. Regardless of racial background, the Dallas Police Department has taken a passive approach on launching their investigation.

Around the same week of the shooting, I met a neighboring business owner to Major Bloom’s retail location in Worcester, MA. The business owner told me a story of how his family of immigrants came to the United States with nothing and succeeded through entrepreneurship. “And like many of your ancestors, we didn’t have much.” Without emotion or reflection, the conversation proceeded as he continued with stories involving business with music icons, security systems, and other insights of his 40-year family-owned sound and lighting company.

I appreciate the stories and feel a connection, and I use any differences to gain perspective. What does it mean to be a good neighbor and how can you and I benefit from what we don’t have in common? Being a good neighbor is protecting each other and being honest with each other. During the digital age, America will undergo a radical change in how communities are policed, redefining neighborhoods and how they function.

Across North America, the taxation of marijuana is increasing, while blacks killed at the hands of police departments continue to happen, leaving separation in society. Through digital age, we can see years of targeted arrests, incarcerations, systemic oppression, and deaths caused by law enforcement and governed through policy.

You have probably thought to yourself, “cops don’t commit a lot of crimes” or “these issues aren’t that bad, and they are natural.” Looking at generations of oppression, I view the criminal justice system as an American tool, used to control the American race, uneducated people, and the poor. But even poor whites have an advantage over blacks when convicted of crimes, from drugs to murder.

Whites are nearly six times less likely to get sentenced and incarcerated for crimes. In 2014 Michael Brown, a black teenager, was killed by a Ferguson, MO police officer who was not convicted for the crime. According to FiveThirtyEight, Police officers get indicted in fewer than 1% of killings, but the indictment rate for civilians involved in murder is 90%.

After Amber Guyger killed her neighbor, many news outlets attempted to slander the image of Botham by reporting, marijuana was found in his apartment, as if his consumption was worth him his death. Michael Brown and Botham Jean are just two of many instances, and police killings are rising. Reported by Mother Jones, according to FBI records from 2005-2015 police fatal shootings across the United States was about 1.1 per day.

And according to The Washington Post, the U.S. has seen a consistent development between 2015 and 2018 to over 2.4 daily fatal shootings by police. Community policing is a concept which involves the decentralization of authority and patrolling. An officer would focus on problem-solving with members of the communities, rather than hitting an arrest quota pushed down from the state.

Police Officers need to adapt skills and techniques across different environments, it is critical to our law enforcement success. If a drug addict threatens to kill themselves, a police officer needs the skills to protect both lives. While that same drug addict could be having a deadly withdraw, that same officer would need to have the medical technical skills to hold on to the addicts life.

It’s no different when dealing with the black population, proper training needs to me implemented to better communities across the nation Policing issues can not be ignored or separated during the legalization of marijuana.