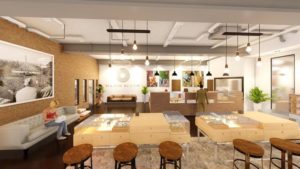 There are over 4,200 religions in the world. Christians remain the largest religious group in the world in 2015, making up nearly a third (31%) of Earth’s 7.3 billion people, according to a new Pew Research Center demographic analysis.

Growing up in a religious household, I’ve watched my father ascend from the congregation to decon, a pastor, and now a bishop. The power of belief is undeniable, and even just sharing this business story is a miracle. As an entrepreneur, you solve problems because you believe people (customers, community, your family & friends) will live a better life.

Whatever you work on, you must have faith in the right outcome, to do your best work. Like a ritual of breaking marijuana down with your fingers to roll-up, I engage in breaking down the legal landscape of the marijuana market to provide value to my network.

As a Co-founder of Major Bloom, I have a 15+ year authentic experience with marijuana and business. My business partner is a lawyer and is easily one of the most outgoing and book-smart individuals I’ve ever come across. Together we’ve obtained several state and local approvals to operate our marijuana business. To date, with nearly 200 marijuana businesses approved by Massachusetts, less than 2-percent of those businesses are from the state program intended to increase diversity and improve communities impacted the worst by the war on drugs.

How has Major Bloom developed into what exists today? By simply believing in ourselves, trusting “the process,” and having an urge to solve problems for marijuana customers, our community, family, and friends.

When voters legalized Massachusetts Adult marijuana in November 2016, the ballot initiative promoted an effort for diversity and a commitment to rehabbing the communities impacted by prohibition. Two years later, the first adult marijuana store opens up in a soccer mom town, which is far from diverse and on the strength of dad’s pocket.

To further explain, Medical Marijuana became legal in 2012, and companies that were operating under those regulations could transfer over to the adult sales market with a few minor details. One of those details includes the process of submitting a direct impact plan and a diversity plan with an application for an adult business license.

The purpose of the direct impact plan is to adopt procedures and policies to promote and encourage full participation in the regulated cannabis industry by individuals from communities disproportionately harmed by marijuana prohibition and enforcement to impact those communities positively. Each business applicant must disclose the specific metrics that will measure the success of its programs. Every licensee, upon renewal, will need to demonstrate that they’ve implemented their plan, leading to the measurable success of the licensee’s goals. The applicant is responsible for disclosing and tracking the intended measurement metrics. Depending on the applicant’s stated goals and programs, measurement metrics will vary. We’ve seen businesses only offer monetary support, which isn’t enough.

Now let’s consider the unspoken or unwritten measurable impact which is extremely common in the marijuana culture. I volunteer at the local YMCA of Worcester, a City where Major Bloom will be operating. A few weeks ago, I saw a 17-year old kid, which I haven’t seen at the gym in a while. For over a year he has been locked up for being caught with a gun. I gave the young man my number and told him to call me for ANY reason.

It breaks my heart to see a young black man experience issues in the criminal system because I’ve been there, and I know society is quick to cut off resources. But as long as I’m breathing, I will always be a resource for black and brown kids. I believe these communities will still progress, and eventually, we will live in a society that doesn’t marginalize people because of the color of their skin or their economic class. As a society, we will get there by first believing in our minds and next, consciously making an effort to do right.

Major Bloom’s journey started in 2017; shortly after, adult marijuana became legal. Laury and I were both Advising Board Members of Massachusetts Recreational Consumer Council, and we both set out to open a legitimate marijuana operation. We both felt a void in the current market, with no entities having a healthy organizational structure and cause to help disenfranchised communities. In other words, with a limited number of shops open, most of the medical businesses came in with the monopolistic ways and out of state money. These people can careless about 17-year olds getting locked up for toting a gun.

Furthermore, these businesses care little about the career growth of employees and the quality of their plants they dispense. These larger businesses want to hold on to the power they have over the market while making as much money as possible.

Even investors, they can care less about social equity, but Laury and I believe so strongly in marijuana leading to the reverse of many wrongs in disenfranchised communities, we’ve grown patient. My optimistic beliefs turn into reality, right in the face of a pessimistic opposition. I’ve made the mistake of hiring a pessimistic contractor, and we turned him and his firm into believers, and if they don’t agree, they are now witnesses.

Even though Major Bloom funds don’t come from mom and dad’s pockets, many other firms we’ve worked with also believe in us and our cause. It’s a blessing to gain this experience.

As a kid, my regression from church started when I noticed the influence of culture outside my small community. The most significant forces in the culture were marijuana and sports. In today’s culture, more people believe in their football team and are more consistent with catching them every Sunday than their attendance to church.

Without funding from mom and dad and only their moral support, I’m thankful they’ve planted the power of belief which can not be measured by a piece of paper.