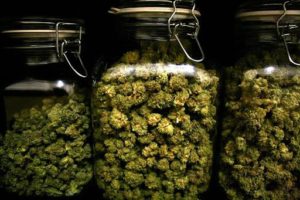 “Jennifer and I met through Clark University on the strength of two of my favorite things, weed and sneakers, thanks to​ ​Lawrence Norman​ teaching a class worth an audit. We met while joining Norman’s marketing class.​ ​Jennifer Roy​ thanks for the feature.”  – Ulysses Youngblood

Q: How did you become involved in the cannabis industry?

A: The cannabis culture is transforming into an industry of social reform. I’m a kid-of-the-culture and became involved in marijuana because it has always been around and made people happy. As a teen, I operated a small family business, which gave me the freedom and discipline to be around the habits and social norms of the plant before legalization.

During my freshman year of college (2006), I was kicked out of my dorm because my room smelled like weed, yet none was found. In 2008 marijuana became decriminalized (in MA), and that year, at my off-campus apartment, I was arrested and jumped by some Officers of the Worcester Police Department. They ultimately dropped the false charge of resisting arrest.

At the age of 23, I decided on a corporate sales and marketing career while also furthering my business education, pursuing an MBA at Northeastern. Marijuana became medically legal in (MA) 2012, and a patient card protected people like me who had pot on them often.

I smoked weed for years, but once I noticed consuming helped get me through business school studies, and recreational cannabis was likely around the corner, it (the industry) called me home, and I’ve been putting all my life’s lessons into Major Bloom.

Shortly after weed legalization, I meet an excellent lawyer (Laury Lucien) who boosted my confidence in this endeavor. In April 2018, we became an Economic Empowerment (EE) certificate holder in the state’s effort to become more diverse in the legal industry and improve communities most impacted by prohibition. Shortly after the state’s EE recognition, we signed our first Host Community Agreement.

Q: You will be teaching a class for Clark University’s Graduate Certificate of Cannabis Regulatory Affairs. Tell us about it.

A: Education is vital to society because we pass on knowledge and skills. My mom is a nursing professor, and my dad is a preacher. Here in Worcester, my wife is an elementary school teacher. And my business partner is also a professor. She developed the first cannabis law class at Suffolk University Law School.

These people (mom, dad, wife, business partner) influence me so much, and I’m grateful to share teaching energy and the power of knowledge with them. Since the Fall ’19, I’ve been teaching business at Clark, so I feel well acclimated with the resources at the University.

I’m developing a class on the social impact of cannabis. A lot of people think marijuana is sexy, new, and fun, but it’s been around for thousands of years, despite the gimmicks of the 20th century. The ugly truth is that people of color have been harmed, and patients have been restricted to healing themselves.

In class, students will explore how cannabis has changed pop culture, the global economy, and has impacted local communities. We will develop critical thinking and communication skills around the social impact of marijuana by analyzing the balance of profits and social purpose.

Q: What motivates you/excites you about the Worcester cannabis scene?

A: Watching my boys grow up is exciting. My wife and I are raising them in Worcester, so the cannabis scene is more about family, being a great neighbor, and feeling the sense of community. Major Bloom’s location in Worcester is minutes away from where we live and mintutes away from Clark. Being in the community motivates me to give back. In the heart of New England, Major Bloom will help Worcester become a progressive City for cannabis operations and its social impact.

Q: Some proponents of cannabis are worried about youth use. You have children. What is your perspective on youth use and the stance the industry should take regarding youth use?

A: A high number of my childhood friends have passed away from an addiction to opioids. Others have been incarcerated for drug-related offenses. When we were in grade school, DARE warned us about the “dangers” of cannabis – WRONG!

My kids are not even in grade school yet, and I keep marijuana around the house and touch it more than I reach for a TV remote or alcohol, so they can grow accustomed. Edibles can often be mistaken for un-infused treats, but I love edibles, so I responsibly keep them out of reach and out of sight for obvious reasons.

From a youth consumption side, studies have shown that youth marijuana use can lead to mental issues in adult years, but those issues do not compare to the dangers of pharmaceutical drugs, alcohol addiction, and deliberate law enforcement targeting in communities. Either way, addiction is a mental issue and should be treated with therapy. Instead of focusing on teaching kids, the “dangers of weed” focus on teaching therapeutics. It seems like a win-win, easier said than done.

Q: Top 5 restaurants in Worcester for the munchies?

A: Major Bloom’s Worcester location is in a perfect spot for weed, food & drinks. There are 5 bars within a five-minute walking distance.

Patsie Duggan’s is across the street from our spot. You might think I’m biased because they are my neighbors. I host meetings in the bar, and their appetizers have literally never failed. Tom’s Deli is also a couple of doors down. Tom’s Italian subs are unbelievable. And in the downtown area, I’m attracted to Armsby Abbey vibe and non-use of a direct overhead light.

When it’s munchie time at home, we’ve been consistent with this Hibitchi spot called Yummy SteakHouse on Grafton Street and El Patron Mexican on Harding Street. There are so many other classics like The Boyton and Kenchi, to name a few. The days of blunts and fast food are behind us!