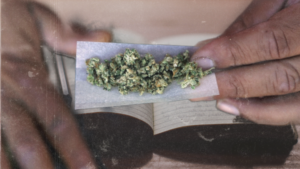 Cannabis has been around human civilization for thousands of years and has only taken a slight twist of control in the physical form and minds of people within the last 100-200 years. Around the mid-1800s, the US Pharmacopoeia indicated cannabis use could help to treat ailments like fatigue, coughing, asthma, migraine headaches, cramps, and depressions.

Hundreds of years ago, the plant was commonly used by doctors, farmers and was a source of food for animals and humans. Additionally, many of the ships that sailed across the Atlantic Ocean to colonize America worked with hemp as a sturdy material.

In many organizations and people’s lives: The plant took a narrow dive when introduced to mass media. Through newspaper propaganda and misleading government reports, The Marijuana Tax Act of 1937 vilified the plant in its entirety.

Quickly and underneath the noses of doctors, farmers, and everyday people, cannabis went from the mass media propaganda to people of color mass incarceration. The War on Drugs was a political campaign that started towards the end of the 1960s, which masked racial injustices with public rhetoric around drug use reduction. Seventy years later: The college student was banned from campus because his dorm room smelled like weed. Many others were arrested and charged with possession or intent to distribute.

Between 2001 and 2010, police made more than 8.2 million marijuana arrests across the US, according to the American Civil Liberties Union. Enforcing possession laws that lead to those arrests costs police $3.6 billion every year, reports the ACLU, but law enforcement cost is just one factor in the equation.

Our Present Day: A majority of states have ended criminal penalties for possession, medicalized, or introduced recreational sales for cannabis. Canada has a total recreational market across the country, while Mexico recently implemented has a medical program.

According to a Forbes article published in Fall 2019, there are approximately 40,000 people incarcerated for marijuana offenses. Society is now moving towards marijuana legalization right after these injustices, which took form through politics and mass media.

The institutionalization of cannabis will not stop and will now take shape in the way of education, assistance, and coaching. The 40K incarcerated, along with their family and friends impacted by these injustices, deserve free education. Cannabis Education in the Community: In my first year of college, they kicked me off campus for my dorm room, merely smelling like cannabis, and now I’m a cannabis Professor, as well as the co-founder of Major Bloom. It’s easy enough for us to say “marijuana should be federally legal” blah blah blah, the task is to shape perception back to good while also healing the harm caused. Education on cannabis will help improve in the medical/ science field, financial institutions, and society as a whole.

Through it all, it’s a blessing to make here. For those with more severe marijuana offenses, I believe state & federal governments are responsible for funding education, assistance, and coaching programs, but don’t wait on it, start self-healing.